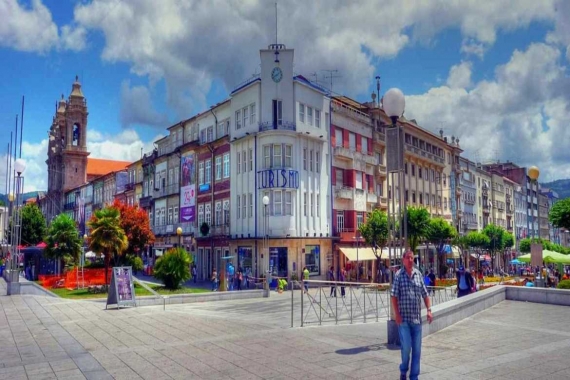 Our day will start in the morning to Braga formerly town of Romans and later "town of the archbishops," Braga is one of the main religious centers of Portugal, which strongly dominates the Baroque. Discover its main monuments such as the Sanctuary of Bom Jesus de Braga, the tiles of the Palacio do Raio, its imposing cathedral and via sacra and its historic  center.

The north of the country and famous for its food so indulge yourself with the typical flavors of the region.

After lunch continue our trip to Guimarães considered the birthplace of Portugal. Here was born the first king of Portugal Afonso D. Henriques.

Guimarães offers its visitors a magnificent historic center classified World Heritage by UNESCO (2001). Meet the corners of the city as European Capital of Culture for 2012, where you can appreciate the evolution of a city of medieval origin, which retains its authenticity today.

On return to port, still visit the oldest town in Portugal.

Even before the foundation of Portugal, was Queen D. Teresa in 1125, recognized this village, referring to it as Town of the  Bridge. Years later, in the fourteenth century, King Pedro I, due to the geo-strategic position of Ponte de Lima, sent her wall, so that the final result was a medieval town surrounded by walls-nine towers, of which remaining two.

Here we find a fine specimen of a Roman bridge still well preserved.